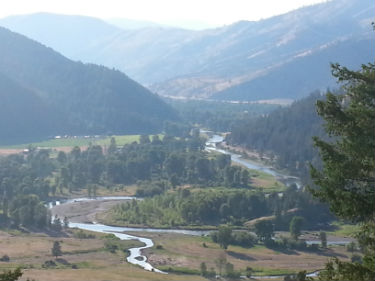 I recently have had such a great experience building my network in a new city and it all stems from sending one e-mail. As many of you know I spend over half of my year in the Missoula, Montana area. This spring I was wrapping up my Goldman Sachs 10,000 small businesses scholarship and was inspired to get involved in the Missoula entrepreneurs scene. I was leaving the Goldman program with a pretty good business opportunity which I had developed. I am considering Missoula as the home for my new business venture as it is a national service and a specific location is not vital, but I love the town of Missoula and believe it would be a great place to launch a business.

Not knowing many professionals in Missoula I decided to reach out to the University of Montana as a way to get involved with entrepreneurs. I went to the website, hopped on to the business page and sent an email to the director of Finance. The short version of what I wrote is that I explained my story. I mentioned that I owned a business in SLC, spent half of my year in the Missoula area and was looking to get connected with the entrepreneurs scene. I told him I wanted to get involved with any incubators and was willing to volunteer my time. Essentially I wanted nothing but to help if I could.

The director of Finance from the University replied pretty quickly and told me to reach out to Paul Gladen who had just founded the Hellgate Venture Network, which was a group that was trying to help out entrepreneurs in the area. He thought this would be a good place to start.

So I reached out to Paul, introduced myself via email and eventually scheduled a phone call. We got along pretty well and he told me to come to a HVN meeting when I was in town and we would see how I could help out.

Due to conflicts I wasn't able to make a HVN meeting until the end of the summer. However, when I finally made it to the meeting it paid off in a huge way. Here is what happened next.

I finally able to meet Paul Gladen in person. We talked again and he said that I should meet Joe Fanguy who was one of the directors of the Montec incubator in Missoula. I met with Joe and we had a great conversation. Joe and I are now talking about how I can help out with the incubator by volunteering my time as a business advisor for the various startups in the incubator.

Paul also wanted to introduce me to Steve Mauer who owns a consulting firm in the area similar to my current firm and also volunteers at the Missoula Launchpad. Steve and I met for a few beers at the Flathead Brewing Company in Missoula and had a really awesome conversation. I'm hoping that I can get involved with the launchpad, but if anything I have a great new connection and I'm sure we will exchange referrals in the future.

While at the first HVN event everyone introduced themselves. One of those people was Austin Walker who is finishing his MBA at the University. He had won a recent start up event and I was very impressed, so I walked over and talked with him. We hit it off and scheduled a phone call. We had another great conversation and he mentioned that he was the President of the Entrepreneurs Club at the University. He asked me to come in and give a speech to the club with the subject matter being "how to start and maintain a lifestyle business."

Lastly, at the HVN event I met Jenn Ewan who is the Director of Entrepreneurship with the Missoula Econcomic Partnership. I eventually connected with Jenn on LinkedIn and asked her to meet so I could understand how I could help grow the entrepreneur scene in Missoula. Jenn set up the meeting and we sat down. Jenn is a super busy woman and a really, really good networker. I could tell she was busy and she eventually just said, "Matt what do you need to start a business in Missoula? Is it capital?" To which I replied, "Yes capital would help." As she is scribbling away in her notebook she said, "Great why don't you come in and pitch your idea to our board. We will give you some feedback and if we like what we hear we will set up a meeting for you to pitch to a group of Angel investors in the area."

So let's recap what I got out of one freaking email:

I received an introduction to the founder of a group that helps entrepreneurs.

That person introduced me to the person who is in charge of the business incubator in town.

He also introduced me to a consultant similar to me who volunteers at the launchpad in town who may be able to help me get involved with that.

At the meeting I met a young guy (who is super smart by the way and would be a great pickup as an employee for any business) who is an eager entrepreneur who happens to be the president of the Entrepreneurs club at the University. He invited me to talk at a meeting which is great PR for us but also an awesome experience and I'm stoked to talk to a bunch of entrepreneurs.

Lastly, at the meeting I met the Director of Entrepreneurship for the Missoula Economic Partnership. Essentially the person who is in charge of attracting businesses to Missoula. She turns out to be a great connection and can get me in front of the right people to pitch my new concept to.

One email....one freaking email. That is all it takes. Or is it? Did I just get lucky?

Quite possibly yes, I did just get lucky. The director of Finance at the University could have easily ignored my email. However, I feel I would have found the right connections eventually anyway.

I believe the reason it worked out this way was my approach of helping, not selling.

What would have happened if I told everyone I was a small business owner from SLC and we know how to do it right? I'm from a big city and I'm better than you (no I don't think that).

I just tried to help and it paid off.

What is your greatest networking story?

Photo Credit #2 by Author. Our office dog Cooper on Rock Creek outside of Missoula.

Turn Your Customers and Network into Evangelists For Your Business

5 Reasons You Need A Great CPA For Your Small Business